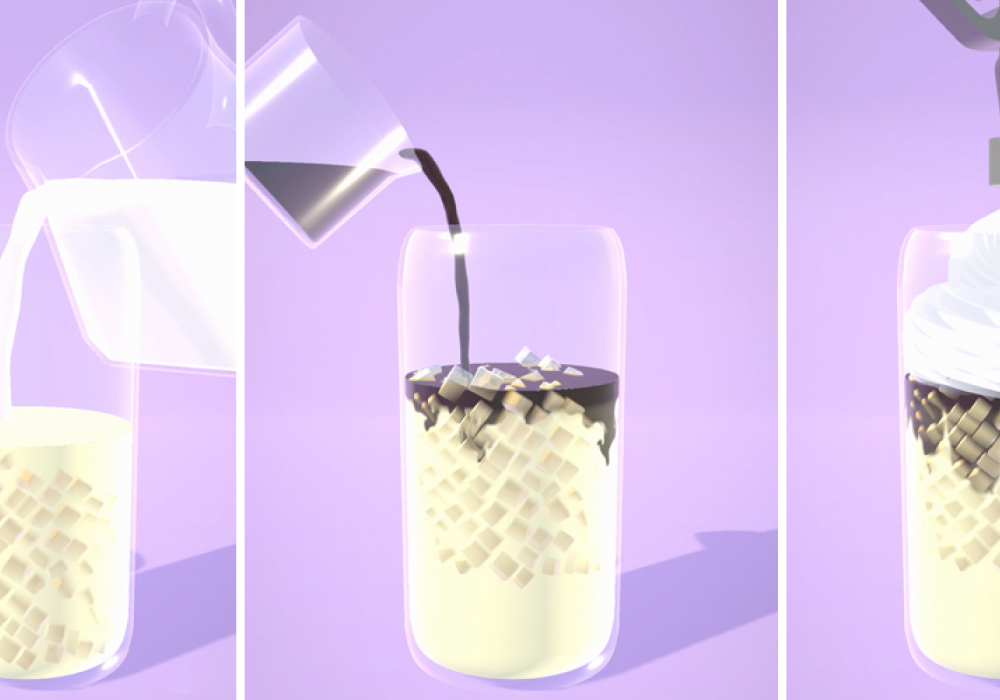 Inside the Success is where our hypercasual experts do a deep-dive into Kwalee’s chart-topping successes, dissecting the game’s production post-release – from development to marketing. Learn how our games are such a success for free!

Have you ever played a hypersim? It’s one of those games with tactile experiences, where you can do whatever you’d like with the tools at your disposal. Two examples would be Bake It and Makeover Studio 3D, which collectively have over 84 million installs on a global scale. Such games are loved for their ASMR elements, but more importantly, they offer a safe space for players to experiment without fear of catastrophic failure.

Creativity was at the helm of our hypersims. And with Perfect Coffee 3D, we took that even further, finding a balance between hand-holding and letting players experiment with the interactive toolbox. This article is all about how Perfect Coffee 3D came to be, how we took it from concept to reality and what it took to get to the finish line.

‘They all looked very hypercasual’, Game designer Chris said of the coffee-making games the team researched. ‘So we thought it would be really cool to make one that looks beautiful and makes you feel like a barista.’ The idea of working with liquids directly inspired the team. They sketched out mechanics and systems that:

The game’s preproduction pitch was a success, and it was time for the team to set the specifics of the mechanics and presentation with our Head of Design.

With the ingredient system, players can create any coffee drink they could with the ingredients in hand. When the customers’ orders come in, players may choose to follow the recipe, or ruin the drink with the wrong ingredients. The idea of punishing the player for ruining drinks (whether intentionally or not) is uncharacteristic of a hypersim, so the designers avoided it.

This gave players the freedom to enjoy playful drink-mixing. With the ingredient system, players spent up to an average of 12 minutes for each session. They spent most of that time in micro-interactions; pouring the ‘right’ ratio, blending ingredients, and sprinkling toppings to give their drinks a bit of visual pizazz.

Although the team saw Perfect Coffee 3D as a hypercasual game, they brought aboard two hybrid-casual-influenced metagame features to reinforce the satisfying coffee-making experience.

The decision to turn the ingredients into unlockables made sense because the team wanted the players to feel rewarded as they expanded their ‘toolset’.

The coffee shop expansion is a curious feature. Apart from being a highly-requested one, the feature also complemented the player’s coffee-making experience. Bea, one of the game’s designers, reasoned it was because players genuinely enjoyed spending time ‘perfecting their craft.’ ‘People were playing it like a hybrid game,’ she said. ‘So we added a metagame — commonly found in the hybrid-casual genre — of building up the player’s cafe. This really gave players a sense of accomplishment, ownership, and progression that is needed for longer-term hybrid-casual games.’

Getting the technology that simulates liquids and mixes was essential to bring these core concepts to life. This has been at the back of everyone’s mind since the game’s concept passed the first pitch.

The prototyping team already knew of existing solutions for fluid simulations. However, they took the opportunity to experiment with 2D fluid dynamics to see how far they could take it for our games. It meant spending a good chunk of their time in R&D to get the liquid mechanics right. And as a positive, the development teams had an intuitive plug-and-play solution for future Kwalee games that use fluid sims.

Implementing the fluid tech was rather difficult. Being a mobile game, the prototyping team knew that the technologies on mobile devices might have limited processing power to run fluid sims smoothly. So running the game itself would be tricky. Much of the tech’s development was vigorous initial experimentation; wrangling through common and uncommon collision issues and colour coordination.

What exactly is the problem if we let the game run on standard mobile devices anyway? Andrew, our prototype programmer, offered context on the matter. ‘By default, the fluid sims would run on the CPU, which would make draw calls on all the pixels of the device individually,’ he said. ‘That’s not good. When that happens, the entire system — the mobile device — slows down and causes performance issues overall. That’s why GPUs are built to handle that. So there was a fair bit of a challenge in getting the simulations to run on the GPU to take that processing load off of the CPU. But we got it to work eventually.’

On the design side, deciding how gamified the game would be was the biggest challenge. Though the concept started out freeform, a cut-off point was needed so that the game had a sense of direction for the audience. Getting the fluid mechanics right was essential to this process.

After the tech was developed, the design team worked out the right balance for players using the tech’s limitations as a constraint. They ensured all the liquids and ingredients would react in a satisfying way with each other, regardless of the order or quantity the player used.

The biggest success on the development side was undoubtedly the fluid tech itself. The design teams were free to use it in any projects that involved fluid sims. Though this doesn’t come without some caveats. Andrew explained, ‘It’s indeed limited by how much it can carry. Meaning, the more layers we add to the tech, the more unwieldy it becomes. It can get difficult to modify and maintain the tech for various projects. But we’ll cross that bridge when needed.’

Overall, much about the game’s release and its success surprised us. The meticulous care players showed when making a simple cup of coffee. The creative ways people name their coffee shops. It gives us the opportunity to think up new designs that deliver satisfying, wholesome experiences people are looking for in gaming.

If you want to make a satisfying game for all ages, then hypersims may be your best bet. If you’re developing one, build your idea with feedback from an experienced game publisher like us. Registering on our Kwalee Publishing Portal will only take as long as it does brewing a delicious cup of coffee!

As an award-winning mobile game publisher, we know what it takes to turn your mobile game into a chart-topping success. Market-test your games through our official Publishing Portal. All you need are a few minutes and a couple of gameplay videos or a simple playable prototype of your mobile game. Follow us on social media (Twitter | Instagram | LinkedIn | YouTube) to get the latest deets on our gamedev efforts.