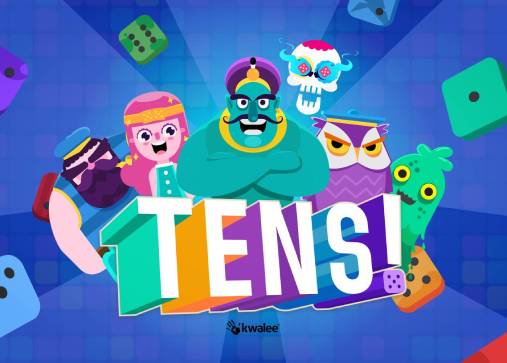 If you’ve been tuned into PAX Online, a huge digital event incorporating EGX Digital to unite two of the biggest and best consumer gaming shows, you might have seen the announcement trailer for our upcoming game TENS! during the Nintendo Life Indie Spotlight.

To recap, TENS! is an incredibly satisfying puzzle game that smartly combines familiar block-dropping gameplay with a Sudoku-style mechanic. Allocated different combinations of dice to fit onto the game board, players can rotate these shapes to maximum effect with the aim of totalling exactly 10 in any row or column.

But to achieve this goal, players will have to adapt to special tiles that re-roll their dice to random values, push carefully-placed dice in a different direction, or even warp them randomly to another spot on the board!

Whether facing off against formidable bosses in the vibrant Adventure Mode, playing against your own high scores in the compelling Endless Mode, or even challenging your friends in competitive local multiplayer, TENS! will challenge players to play smartly to win when it launches later this year.

But in what might come as a surprise to those who know Kwalee as the home of hyper-casual games, TENS! will be launching as a premium title for Nintendo Switch. This will make it Kwalee’s first game for console rather than mobile, but comes backed with decades of dev experience in the area. With our team is filled to the brim with console gaming pedigree from CEO David Darling (co-founder of Codemasters) and COO Jason Falcus (industry veteran with credits on games including NBA Jam and Super Puzzle Fighter II Turbo), to team members in various positions who have experience working on hit console titles.

Another important thing to clarify is that TENS! on Nintendo Switch does not signal a move away from hyper-casual mobile games for Kwalee, but instead yet another example of how we are continually looking to expand and grow as a company that lives for providing players with great gaming experiences. With that in mind, we remain focused on developing and publishing the best hyper-casual games around, which we’ve shown this year with multiple hits and countless downloads that are fast approaching the half a billion download mark!

So keep sending our publishing team your hyper-casual creations and keep an eye out for mobile releases of our own… just be sure to do it while giving TENS! a go on your Switch when it’s released later this year!

Learn more about TENS! here and stay tuned to our website and social channels for news and updates – including release date, which is set to be revealed soon!