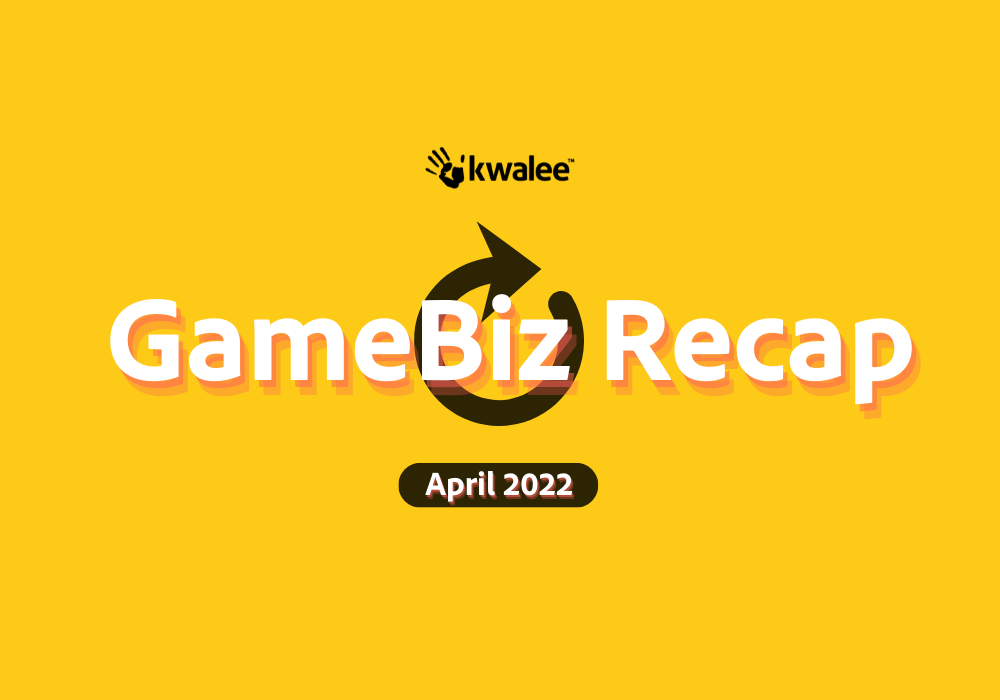 Welcome to Gamebiz Recap, where we take a look at what’s new and interesting in the last quarter that has flown by. Whether it’s to catch up on the latest scoop or to gather some quick talking points for your interview with our headhunters, all the latest on Kwalee and the industry as a whole is right here for your reference.

The mobile games industry continues to grow at a rapid rate. According to BusinessWire, the global gaming market is expected to reach a value of over $314 billion by 2026 and is said to receive an average investment return of 9.64% within the years of 2021 to 2026.

As casual games make up 78% of all mobile game installs and generate 23% of the total revenue made by the market, Kwalee’s expansion into this territory solidifies our belief in the massive potential of the current mobile gaming market. This opens a lot of doors for developers who partner with us to not only top the charts with hypercasual games, but hybrid-casual and casual titles too.

Our journey into the casual market began when we joined hands with Tictales, a narrative casual games studio. More on that later.

With the mobile games industry growing so fast, you might be curious about the success that’s powering it. Well, in February 2022, popular consumer database platform Statista reported that the endless runner game Subway Surfers was the second-most installed gaming app on the Google Play Store worldwide. Leading app analytics platform SensorTower reported that the game generated close to 19 million downloads on Android alone.

At a similar time, in March 2022, Kwalee officially crossed over 800 million global installs. This was made possible partially thanks to the release of our hypersim, Airport Security, which continues to top the charts with over 13 million installs in its fourth month. According to Statista, the game ranks #10 in the Top 10 most-installed Android games in 2022.

In the game, you’re an airport security officer tasked to keep the airport safe. You pat passengers down, check their passports, interrogate them and use your intuition or logic to either arrest them or let them go. We put together a deep dive on what makes that game play so well and perform so successfully in the market.

Currently, Airport Security joins our list of over 45 number one games that hit the top of the charts in numerous countries including the United States, Brazil, India, and the United Kingdom. The game has been #1 app on the App Store in six countries, including the USA and the UK, and #1 game in 25 countries.

Try it for free on your Android or iOS device.

With some of the most high-profile acquisition stories including Microsoft acquiring Activision-Blizzard and Sony acquiring the Halo-famed Bungie, 2022 became the biggest year for games industry M&A activity to date.

With its estimated value nearing $100 billion in Q1 alone, surpassing M&A activity in all of 2021, we’re very proud to say that we’re part of this record-breaking period.

In January, we made our first ever acquisition with Tictales, the French narrative games studio famous for hit casual mobile games such as Perfume of Love and Love & Diaries.

We invited both the CEO and Creative Director Harouna Camara to talk about Tictales’ journey from a university idea to become the leading casual narrative games company in the mobile gaming industry.

Additionally, our PC and Console Publishing team has been working hard to bring jaw-dropping content for our communities to sink their teeth into. We introduced the world to Scathe – a new gory first-person shooter that traps you and your friends in a hellish maze, developed by our passionate developers at Damage State. Our announcement trailer received one hell of a great response from Twitter threads and YouTube comments.

With Draw it breaking the ceiling as our most installed game, it was a unique opportunity for us to do something to commemorate this milestone.

That’s why we wanted to show the community what it was like to take that game to the top of the charts. If you haven’t caught it yet, we released our first ever ‘making of’ video that dives deep into the development of Draw it, from concept to finish:

The team had loads of fun filming it, revisiting their earliest memories of Draw it and reminiscing on watching it climb the charts as they flew to San Francisco.

We couldn’t have reached this point without you.

The Kwalee gang’s been busy… having fun!

The past three months were brim with exciting projects, announcements, and events for us.

Shortly after our Sunset Game Jam event we hosted in March 2022, our expert team of publishing managers and executives led by William Cox (Mobile Publishing Head) and Max Everingham (PC & Console) flew all the way to GDC San Francisco, where they had the chance to meet passionate game developers looking for publishers to partner with.

And while they took in the view of the magnificent Golden Gate Bridge, our teams did something special for International Women’s Day back at our studios in Leamington Spa, Bangalore and Beijing.

Women in Games hosted their Careers and Networking Expo, and as a corporate ambassador we had the amazing opportunity to connect with many talented women employees working in the games industry.

We also interviewed some of our brilliant women working at Kwalee for our latest blog entry of People Make Kwalee, which quickly became one of the most well-received posts we’ve done. The touching responses we received are a strong reminder of how we’re not only in the business of topping charts, but also to bring people together.

Speaking of bringing people together, the Kwalee team had their first quarterly team-building events of 2022, with both the Leamington and Bangalore teams heading out and showing us their team spirit.

Oh, and the Queen invited us to her grand birthday party at the British High Commission. (Pretty cool, right?)

So what’s next? Well, with the company seeing 107 hires last year, we’ve been setting up plans to beat that high score this year, already having hired a number of employees and particularly building out our Quality Assurance teams in the past three months.

With so many projects underway, we’ll need to lean heavily on folks that can help us keep things in tip-top shape. We’re still hiring for various roles of all levels in Bangalore, Leamington and remotely.

So with the public appetite for games only increasing and plenty of big-money industry consolidation in the form of record-breaking acquisitions, it’s been an exciting start to 2022 that promises much to come.

Don’t miss out on July’s edition of the Gamebiz Recap series, when we’ll be back with many more industry trends and Kwalee developments to share with you.