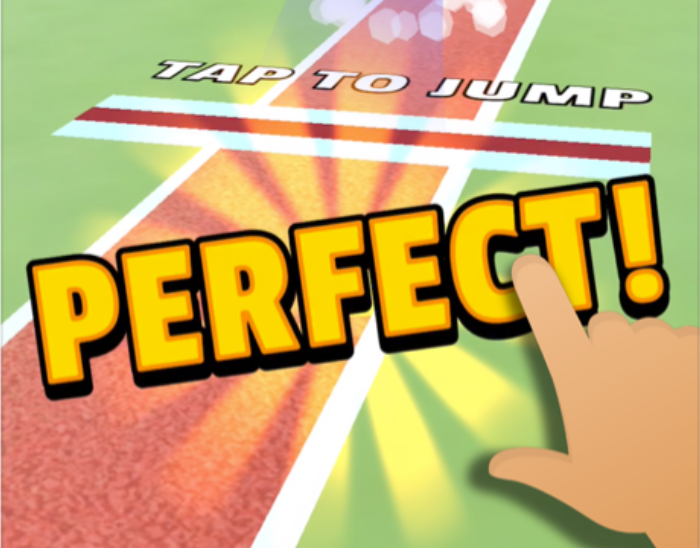 Depending on who you ask, you might be given differing definitions of what exactly makes a hyper-casual game. There are no doubt some things that go hand in hand with hyper-casual gaming, such as the game having a short lifespan, the majority of revenue coming from ads and the fact that they can be developed quickly. But these don’t define what actually makes a successful hyper-casual title…

Luckily, our Head of Publishing Simon Prytherch took to the stage at Pocket Gamer Connects London and discussed the three key principles of what really goes into creating a chart-topping hyper-casual game. If you didn’t catch it, we’ve compiled the key takeaways from the talk below!

A primary goal of hyper-casual game development is to create a game that achieves millions of downloads, and therefore tops the charts around the world. The only way this is going to be possible, is for the game to have mass appeal. There’s no point creating a niche game that is only going to connect with a small group of people, as there’s no way it will reach your goal of downloads, and a low cost per install (CPI).

Going beyond avoiding creating something with only a niche appeal, there’s also a need to avoid offensive visuals. By this, we don’t mean outwardly offensive visuals such as x-rated material, but instead the need to ensure your game doesn’t exclude people by gearing it towards a certain gender or culture. Everything doesn’t have to be cubes, but use colours and visuals that can appeal to everybody and avoid references to things only certain people might understand.

Alongside getting the visuals down, your game needs to have moments that look and feel good. Players will want to keep playing for those moments of satisfaction. Take our game Drop & Smash for example, with the satisfying moment coming from watching your object fall and then obliterate the object below, with a special ‘Smash Cam’ helping to elevate this moment even more. 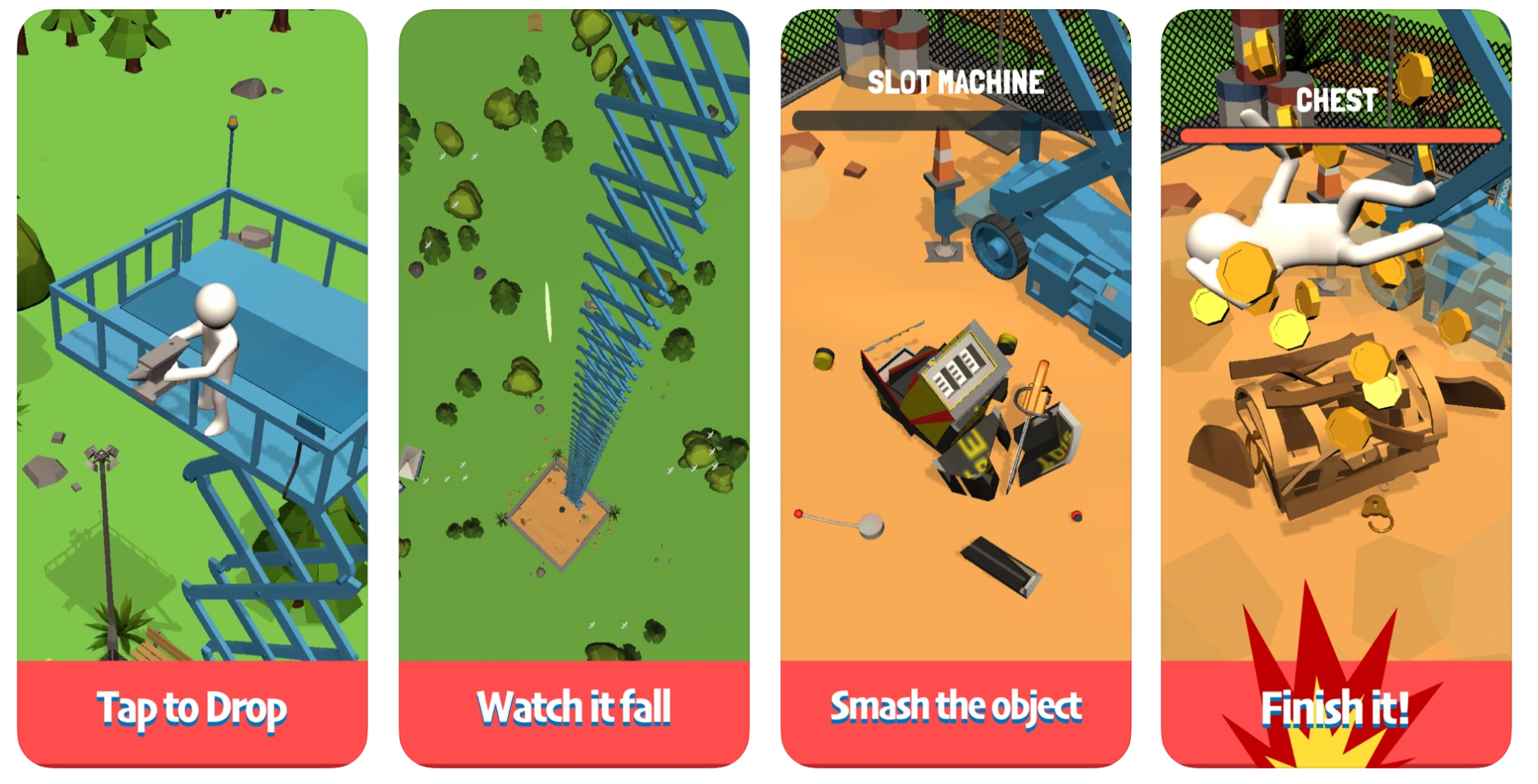 Obviously when creating a hyper-casual game, you’re not looking to develop a long running story arc, but instead create simple and satisfying mechanics with levels that can be played through in bite-sized sessions. You want to ensure that your players can play with ease, being able to play in portrait, with one hand and understand and master what they need to do quickly.

Alongside this ease of ‘pick up and play’, you also want to make sure that the mechanics of your game aren’t overly simplistic. For example, instead of just a ‘tap to jump’ mechanic, the player could hold to increase the height/arc of their jump, adding an additional layer to the gameplay, whilst still keeping things simple enough to be understood in a matter of seconds, and played in bite-sized chunks.

An example of when we used this principle was with Plank!, where the player has to tap and hold to decide on the length of plank they need to reach the other side. A game where you simply tap to keep laying planks would have zero difficulty, and therefore no challenges to overcome, reducing the reason to continue playing. 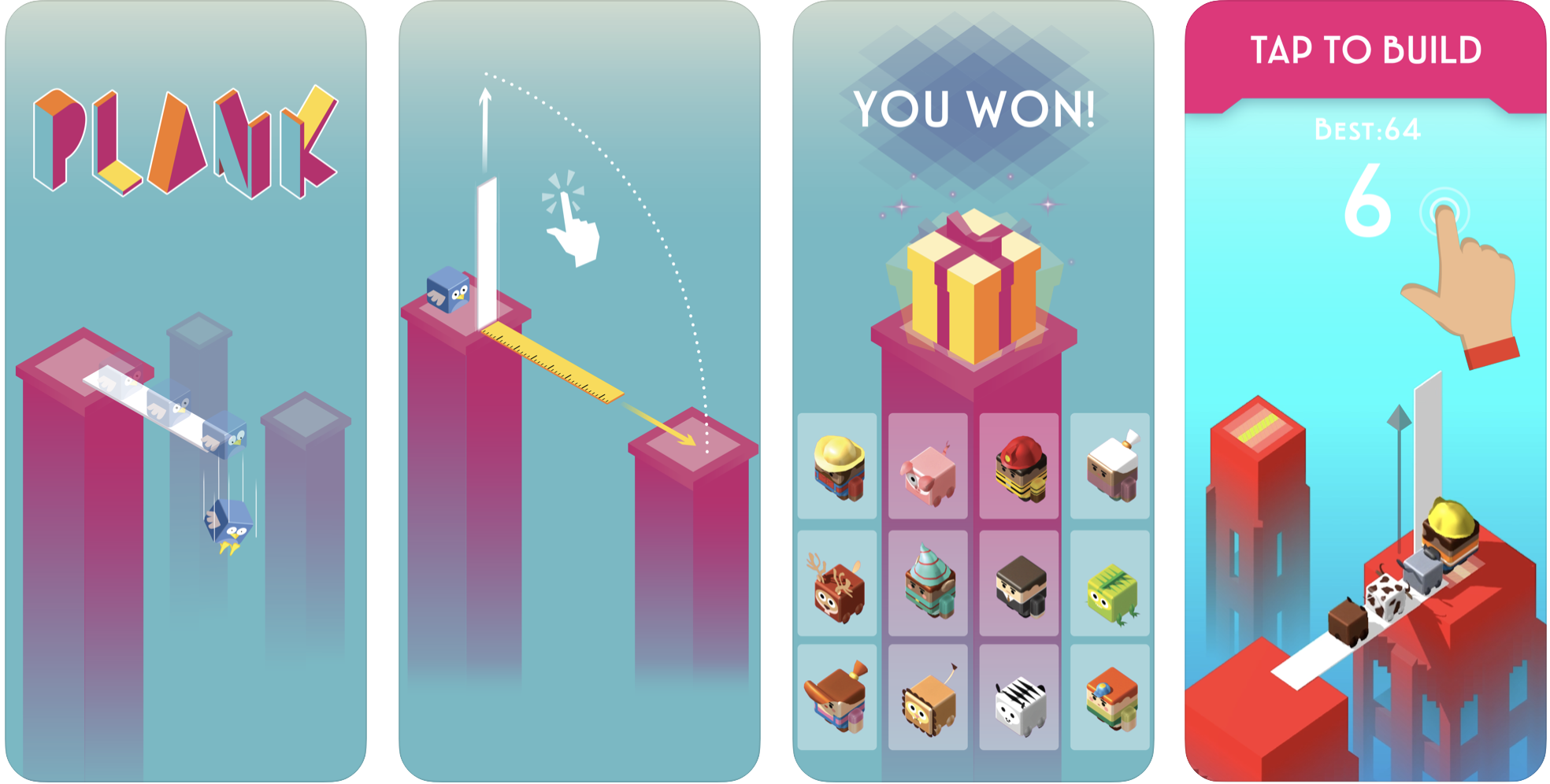 As with all types of games, the player needs to be given a reason to keep playing (retention), and progression is a big part of this. Of course with hyper-casual, this progression isn’t going to be as far-reaching as with other games, however simple things can help players to justify themselves keeping on playing. In Jetpack Jump, the ability to progress through new locations around the world and upgrades that help you jump further provides this progression, and in turn retain players. 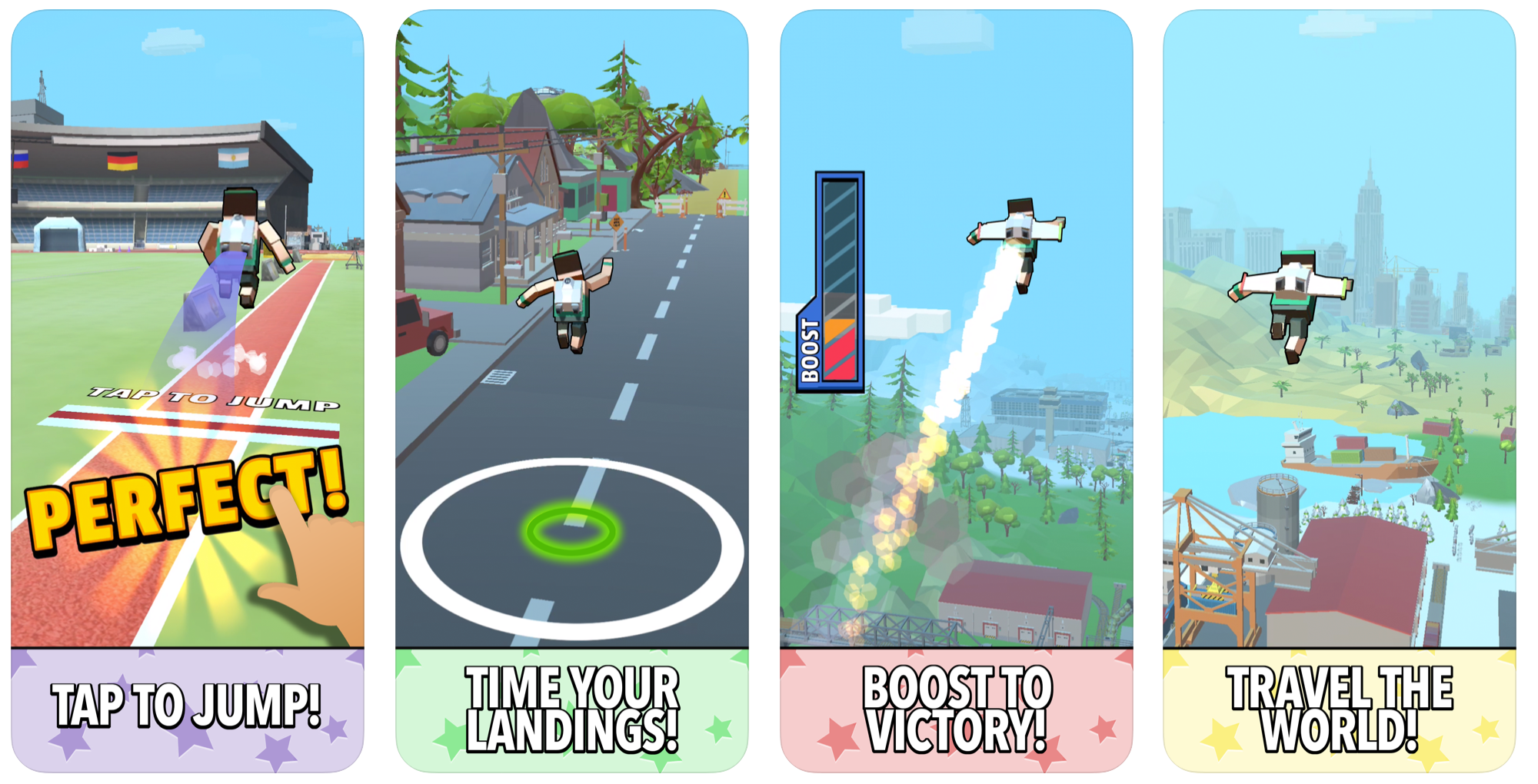 Another way to retain players is to create an illusion of depth and create an expansive playing experience. One of our recently published games, Clean Up 3D, created by UK based developers App Design Company, does this really well. With the player being able to instantly change direction and find out what lies in other areas of the game, hoover up the environment, increase the size of their vacuum cleaner and eventually go outside to consume cars, buildings and aeroplanes. There’s no bad decisions, just the satisfying ability to move in any direction and explore the depth of the game. 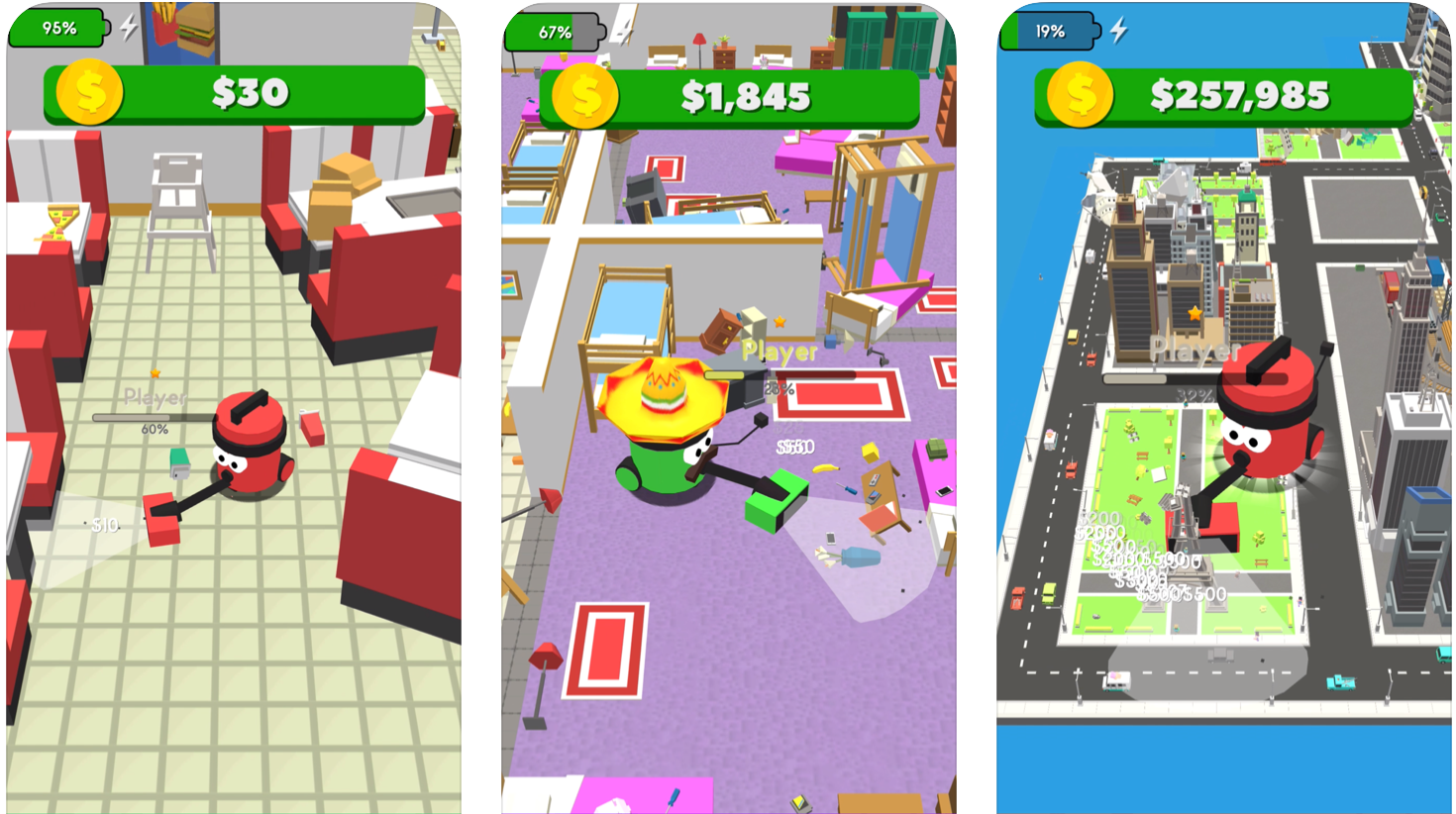 Three slides from Simon’s talk at Pocket Gamer Connects  summarised these principles really well, with some Kwalee titles that hit these marks and have been downloaded by more 120 million players! Take a look for yourself: 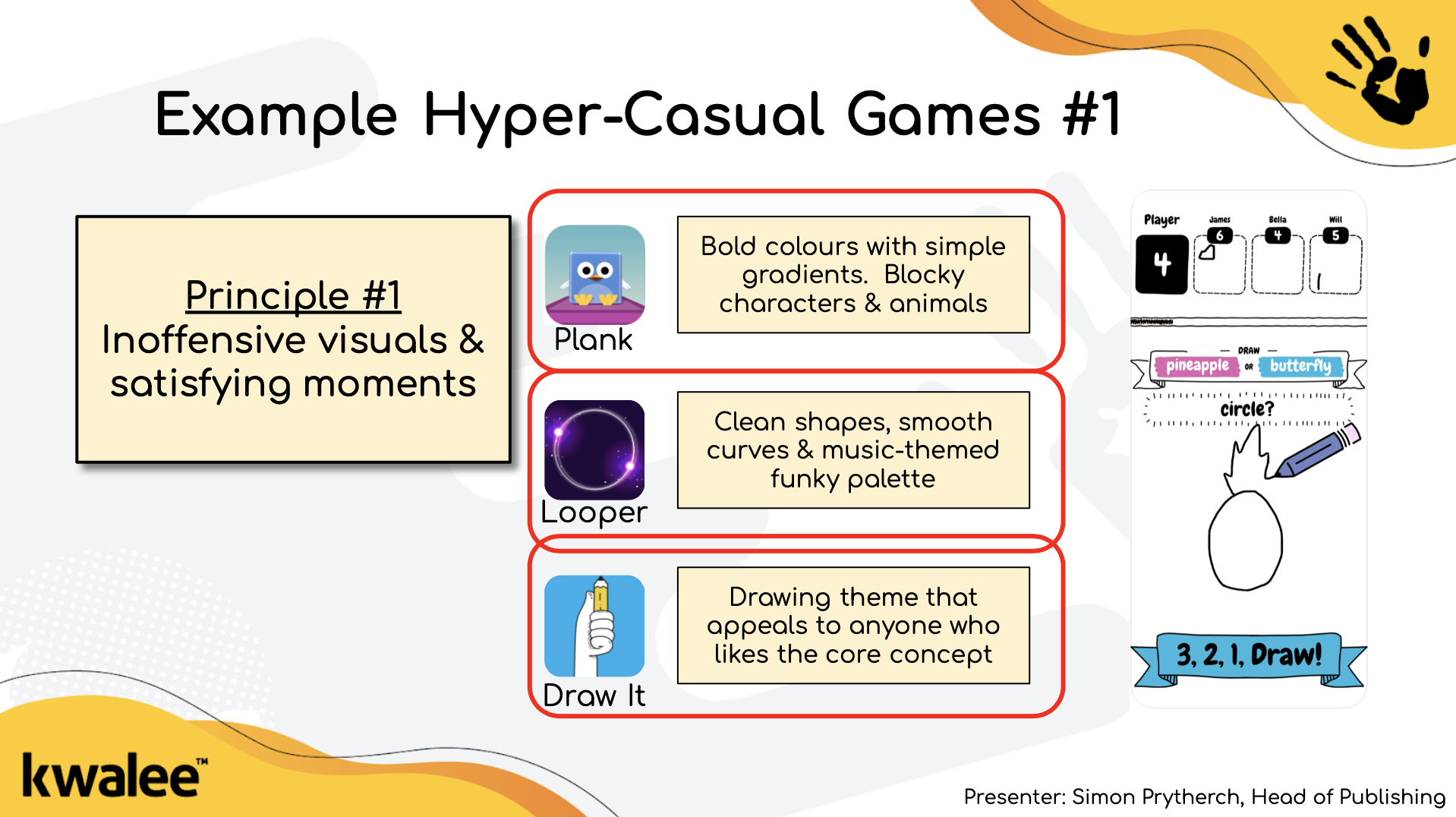 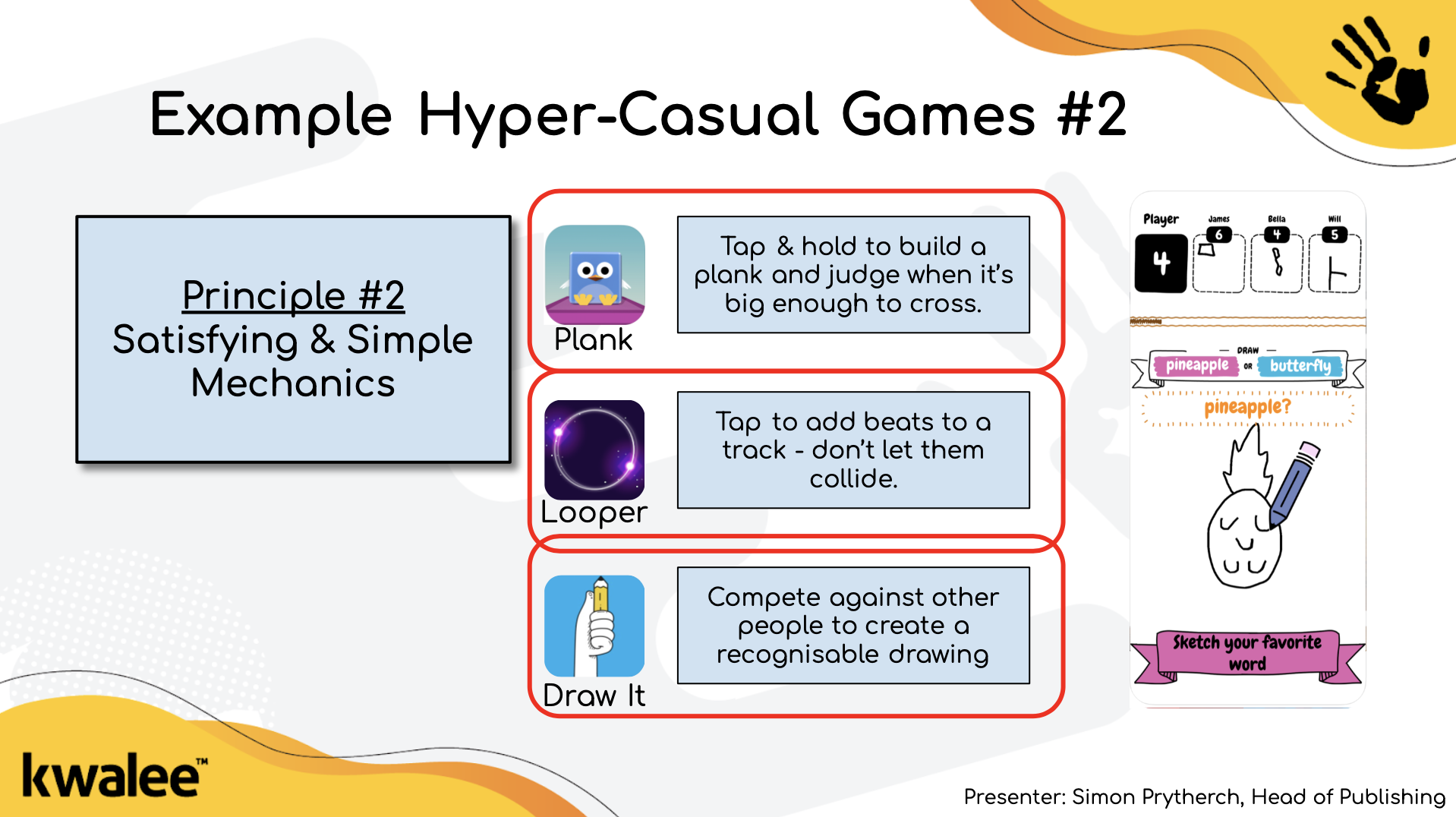 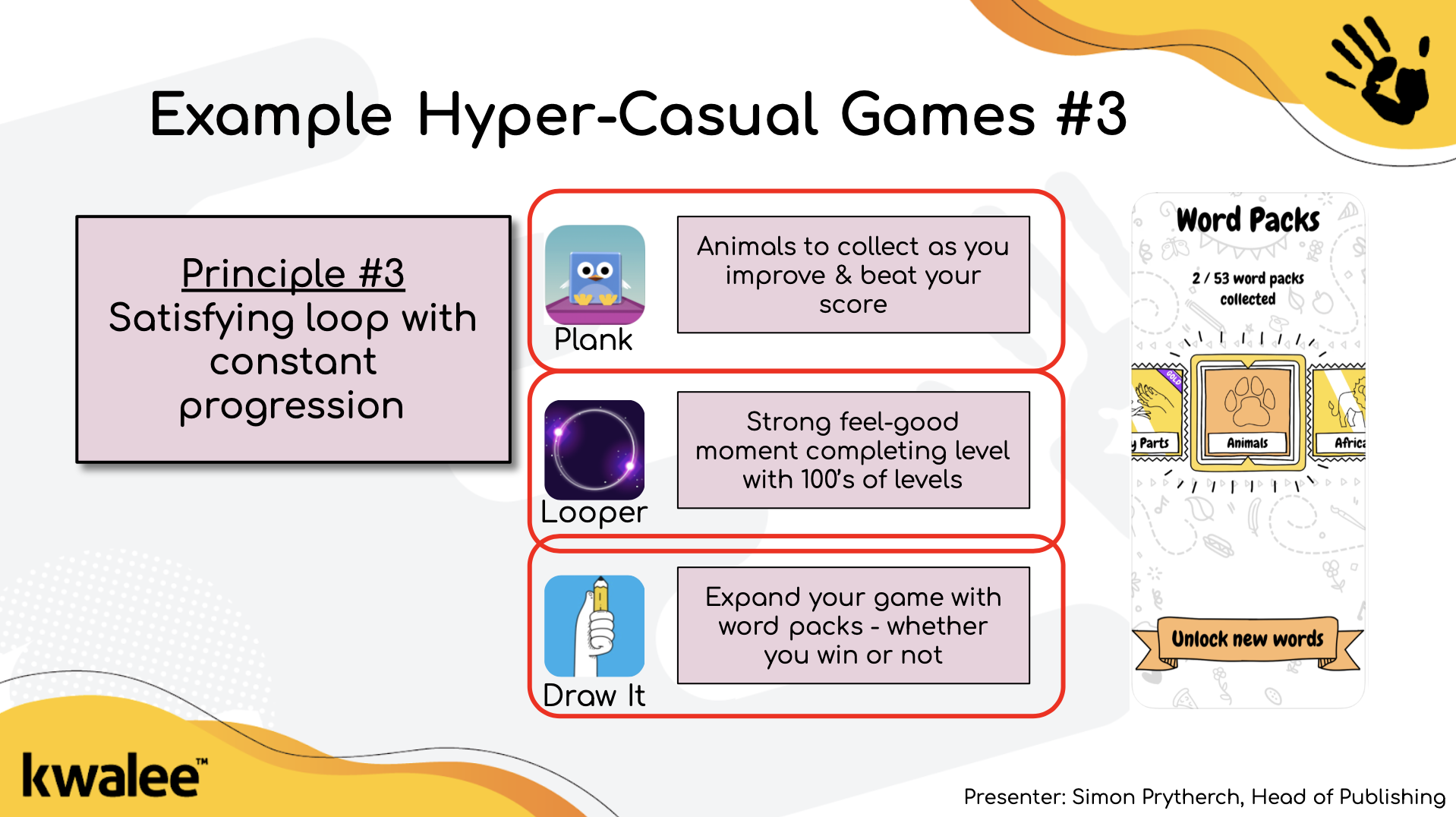 If you have a game that you feel meets these three principles and could be the next chart-topping success, then find out more about submitting your game here and we’ll help you make it a reality!

Simon Prytherch brings over 30 years of industry experience to his Head of Publishing role at Kwalee, with previous positions including 7 years at Codemasters, where he headed up key titles such as LMA Manager. Simon has also been CEO of Lightning Fish Games, Chromativity and Fluid Games, ahead of a recent Software Development Manager role at Amazon. Simon’s focus at Kwalee is to replicate the chart-topping success of third-party titles such as Rocket Sky! multiple times over, and build an industry-leading publishing team.