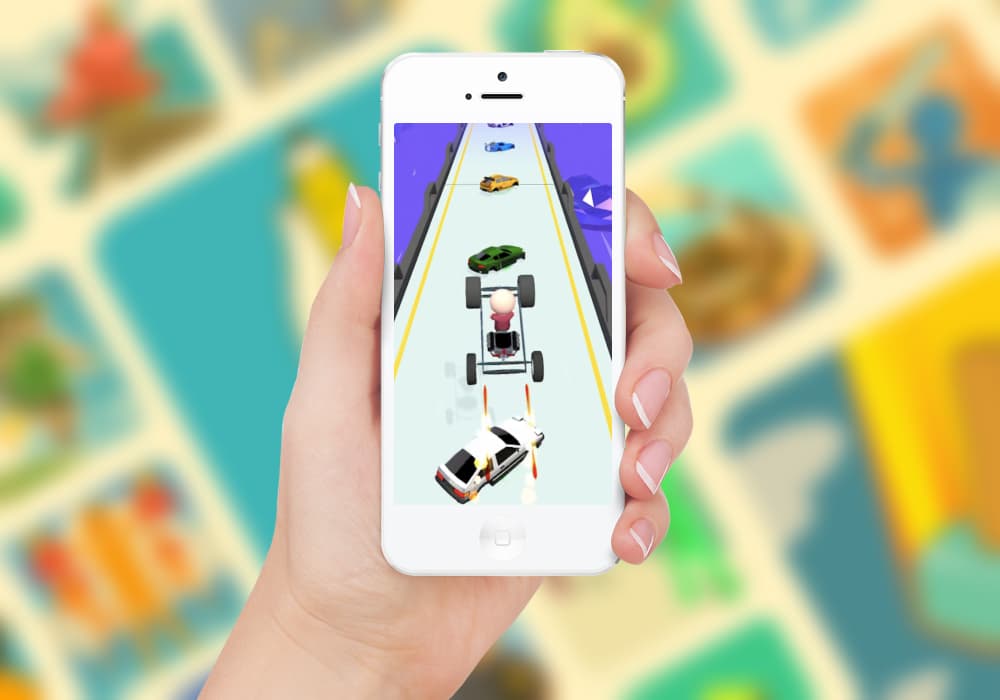 Fun fact: Build Your Vehicle was a concept that existed way back in May 2021. But it never made the cut after the tests showed very poor results… until the project was resurrected a year later. Normally, our philosophy is to fail fast; test, prototype, and ship quickly when the data is convincing and move on when it doesn’t. So what changed in a year?

Well, the idea came up during a brainstorming session between our Publishing Managers and the developers at Clap Clap Games. The PMs gave them various references and loose ideas from current trends on the market. One of the trendy ideas was the theme of assembling cars with a runner twist.

Taking this as a potential winner, the developers made their first prototype in May 2021, and tested it. Unfortunately, the less-than-positive test results threatened to squash a bit of the motivation for the game.

This is the story of how both Kwalee and Clap Clap Games turned a potential failure into a big success.

Build Your Vehicle is a runner where players pick up parts, build their vehicle, and race to the finish line. The initial version tested in May 2021 kept both the player and the opponent on separate pathways. This gave the player a single-player experience. Once all the parts are collected, the players enter a “racing minigame phase”, completely separate from the “part collection phase”.

What the initial tests said

The results from the market-tests helped the team find the faults that were holding the game back. The developers first tested the initial prototype during May 2021, and again in early June 2021.

The numbers they saw made the developers lose any drive for building the game. They didn’t feel there was much they could do to improve it. Hence, the project was abandoned and we moved on to other games.

In September 2021, the discarded prototype caught the eye of one of our Publishing Managers. They recommended that the team give the game another try. So the project was resurrected and a second prototype was made ready.

The challenges in the second version

After testing v2.0 it became clear that we had a much more engaging product. The first results came back positive, with low CPI and retention rates stabilising at 30% on Day 1. The game was displaying a healthy chunk of playtime – people were enjoying playing! The developers saw promising results, and chose to soft-launch the game in February 2022 with some ads.

However, the retention rates for both iOS and Android platforms didn’t reach the numbers we were expecting. We attributed this to various issues including:

By tackling these issues, we increased the game’s retention until we hit an impressive 40% D1; 10% higher than the first build. The playtime rates from this test also exceeded the playtime rates we saw in the first retention test. As for the CPI, it was no more than 10-13c on social media platforms, including TikTok, Snapchat, and Facebook.

Overall, it took a lot of changes to achieve excellent results with the game today.

The biggest issue was the gameplay itself. The different systems felt disconnected from each other, and there was a lack of challenge. So the developers took another look at the core gameplay to see what could improve and what could resonate with players.

The key gameplay change put the player and AI on the same track, connecting them together to allow any physicality between them to take place.

For example, if the AI picked an item up, the player would have missed their chance, creating tension. Players wouldn’t just be racing to the finish line, they would also be fighting to collect the best parts. So people will naturally want to overtake the AI, bump into them, push them to the side, and get aggressive to get ahead.

The second draft of improvements polished the competitive theme: particle effects, camera angle changes, and other improvements to the “game feel” and immersion.

What’s next for Build Your Vehicle?

The game has gained a lot of traction since its release, reaching over 3.6 million installs globally in under a month.

Now, the developers are working on the game’s analytics with our Publishing team to improve the game, including:

We have a full deep dive available on the Kwalee Publishing Portal – entry is free! Join the Portal, and get access to our premium hypercasual content – unlock your potential and make the next chart-topping success.