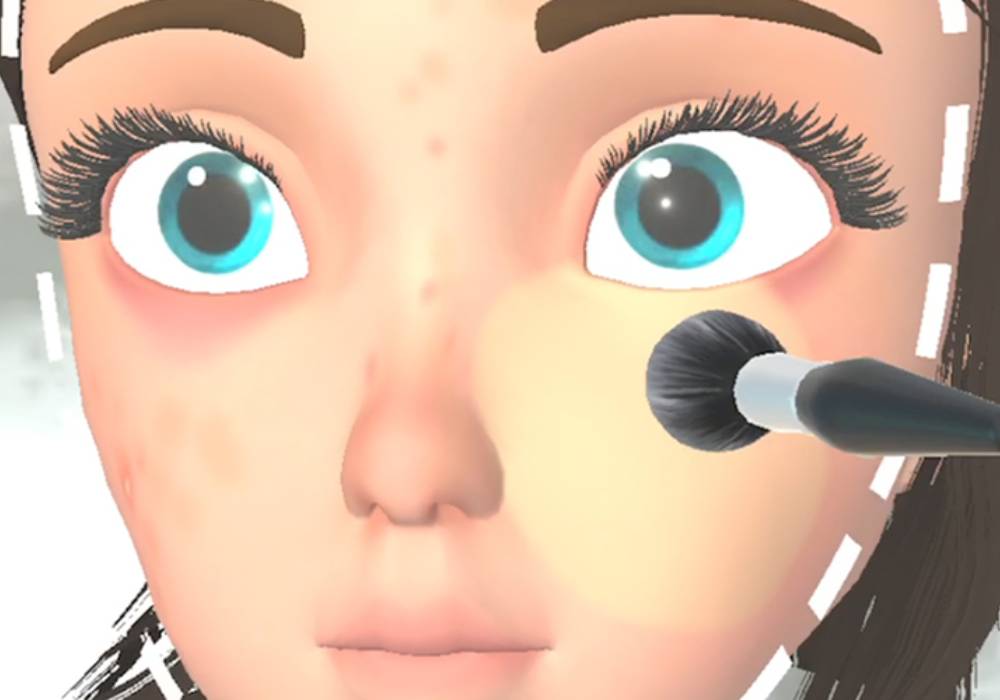 One of the most satisfying things about working in hypercasual games is that they never stand still. From Draw It and Shootout 3D to Let’s Be Cops 3D and Teacher Simulator, we’ve launched a vast array of hits that often bear little relation to one another except their success.

Indeed, the games that go on to launch globally represent only a small percentage of the game ideas and prototypes we’re making every day with our ‘fail fast’ approach, and the diversity of the games we create is clear to see at all stages.

But even in this context, Makeover Studio 3D stands out as something of a departure for us. A simulator game with a primarily female audience in which the player applies makeup, contouring and other cosmetic procedures to a series of clients, the project demanded a quite different approach.

With the game having surpassed 9 million downloads, after launching globally in April, it’s safe to say that it’s been a big hit. So what have been the key factors in its success and what can be learned from it?

We put that question to some key players in its development and here’s what they told us!

Don’t just look at trends – analyse and understand them

It’s not uncommon for a hit hypercasual game to draw inspiration from viral videos on TikTok or other social media platforms, but with Makeover Studio 3D we found that being specific about what makes these trends appealing was key.

Senior Game Designer Jess Darling, who championed the concept, explains that her initial pitch came from “watching TikToks of girls getting their teeth whitened, lip fillers, nose jobs etc.,” which was something she noticed “just getting more and more popular.”

But it wasn’t just a case of hopping on a popular trend to make a game with that theme. Many days of brainstorming were involved, many perspectives sought and crucially, many different examples of makeover and ‘glow up’ transformations on TikTok and YouTube were absorbed.

Head of Development Simon Platt notes that Jess was “quick to bring very specific examples of viral videos to the team, which ultimately led us down the path for Makeover Studio.”

It’s this specificity that proved to be the key, and this only comes when you take more than a superficial interest to see not just what’s popular, but why it is so popular. What are the key moments in the videos that are drawing people in?

It’s also worth noting that Makeover Studio 3D is Kwalee’s first game specifically targeted at a female audience, which has come at a time of what Jess describes as “an influx of female-focused hypercasual games,” but this was a byproduct of our inspiration and not the other way around. The idea should come first and that will define the game’s audience!

Decisions that matter and the freedom to play

For the Makeover Studio 3D development team, it is clear that giving the player lots of creative freedom – be that to excel, or to go rogue – is a big part of the game’s appeal.

From the very earliest prototypes, Jess notes that “the player could decide to inject lip filler in the correct places with the right amount, or inject too much into the lips and even anywhere in the face, leaving the client really unhappy.”

“You could give her the correct amount of fake tan and do her makeup perfectly, or you could spray her with too much fake tan leaving her really orange and then do her makeup awfully.”

This obviously leads to some amusing visuals and gives the player another fun way to interact with the game, not to mention it opening plenty of opportunities for attention-grabbing video ads!

“Although you are judged on your efforts, there is an open invitation for people to, as you would when learning make-up application, play around with the tools,” says Simon. “You want to see what happens if you apply contour across the forehead? You think you can create a better look than us? Go for it.”

“By understanding our audience we were able to sink our efforts where they were most valuable and for Makeover Studio 3D that was in the dynamic application and blending of the makeup,” he adds. “We want our players to feel like their decisions matter and so creating a technology that actually blends the colours across the face was a key ingredient to the game’s success.”

Some ideas are better together

We’re open about our fail-fast approach to game development, which means that we have many prototypes that don’t end up being released. Any developer in the hypercasual space will tell the same story.

But that doesn’t mean that nothing can be learned from the games that don’t make it – far from it, in fact!

In the case of Makeover Studio 3D, it actually combined two separate prototypes with a similar theme – one about applying makeup, the other based around plastic surgery. New gameplay was added, but it was the content from these two prototypes that formed the basis of the final game.

“The decision to mash two prototypes together gave us a strong range of creativity when it came to ads and content,” says Simon. Obviously it is not always so easy to do, nor is it a magic bullet, but it is worth considering if any of your prototypes can be elevated by ideas and gameplay originally intended for other games. While simple, it can have a transformative effect!

This final one could be universally applied to any hypercasual game, and it is something we advise a lot, but you really should consider how your videos will look from an early stage in development.

“If I was to use one word to describe the approach to ads for Makeover Studio 3D, it would be ‘direct’,” says our Head of Digital Marketing Ryan Davies. “The camera placement in the game, and the close proximity of the character to the screen, helps our ads jump off the screen and stand out. In the busy space of our players’ mobile devices, this is pretty crucial.”

While you can be very creative with ads, they should always ultimately be led by the gameplay itself and this is why it’s important to consider not only what’s fun to play, but what is fun to watch.

Does the fun of the game come across visually, without actually being hands-on with it? If not, there’s only so much that can be done with the ad itself without reconsidering the actual gameplay.

If you think your game has the potential to become the next hypercasual hit, learn more about publishing with us here to get started on your journey to the top of the charts! You’ll get to work directly with the hypercasual experts in this article, along with many others.