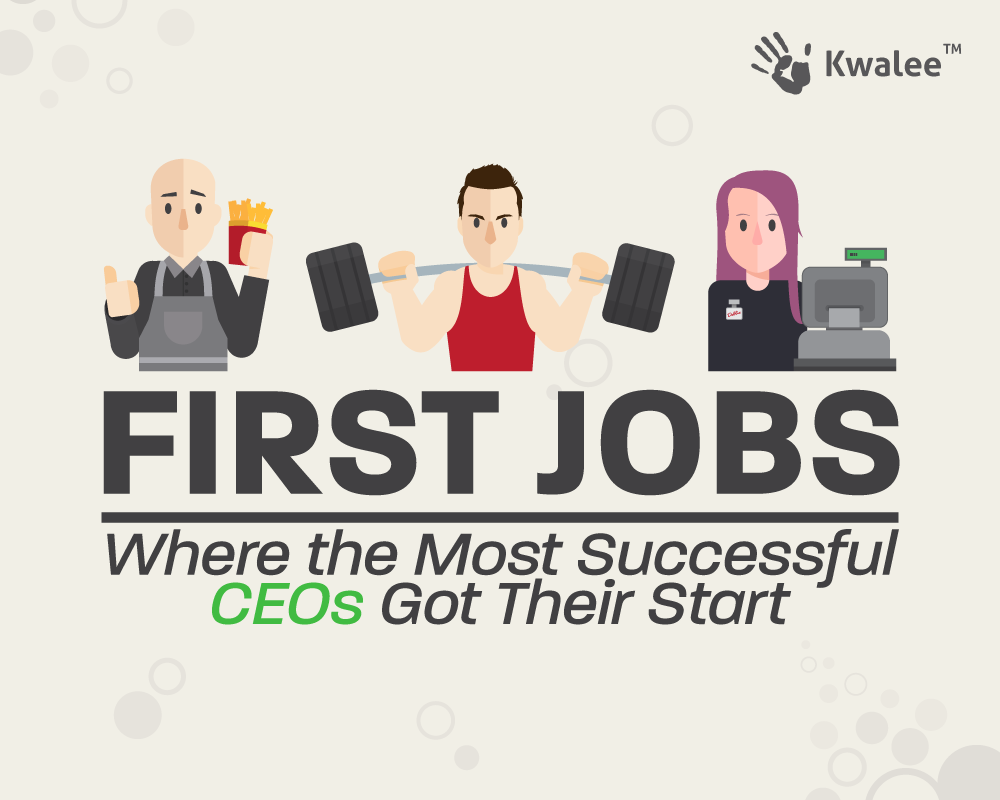 Their companies are responsible for the video games and tech that we enjoy every day, and yet it can feel as though the world’s foremost CEOs exist on another planet that many of us could only dream of occupying.

Incredibly wealthy and with seemingly supernatural talents, you’d be forgiven for assuming that they emerged fully formed into their lofty positions and have always worked within their industry of choice, benefitting from years of experience and the ability to progress up the ladder.

And indeed, our research has found that roles in gaming and tech are perceived by the general public as some of the most desirable to work in, but also among the most difficult to break into.

We’re living through turbulent times, with many individuals and businesses facing real difficulties as a result of the coronavirus pandemic. But gaming and tech have been some of the most resilient industries, with so many of us turning to video games, on-demand TV streaming and other digital entertainment to keep ourselves entertained.

Tech companies have also enjoyed a smoother transition to remote working than most, and at Kwalee we’ve even been inspired to embrace remote working in the longer term as well as continuing to hire as normal. We’re in good company in this regard, with the likes of Twitter, Facebook and Slack all committing to permanent remote working options for staff.

So with gaming and tech firms already adapting and beginning to look beyond COVID-19, these industries are becoming even more attractive. But is there truth to the perception that they’re difficult to break into?

To help provide some perspective, we went back to the very beginning and researched the first jobs of more than 100 of the most notable CEOs in gaming and tech. This revealed some surprises, but also a lot of hope, with 65% of CEOs  beginning their careers outside of their current sectors. 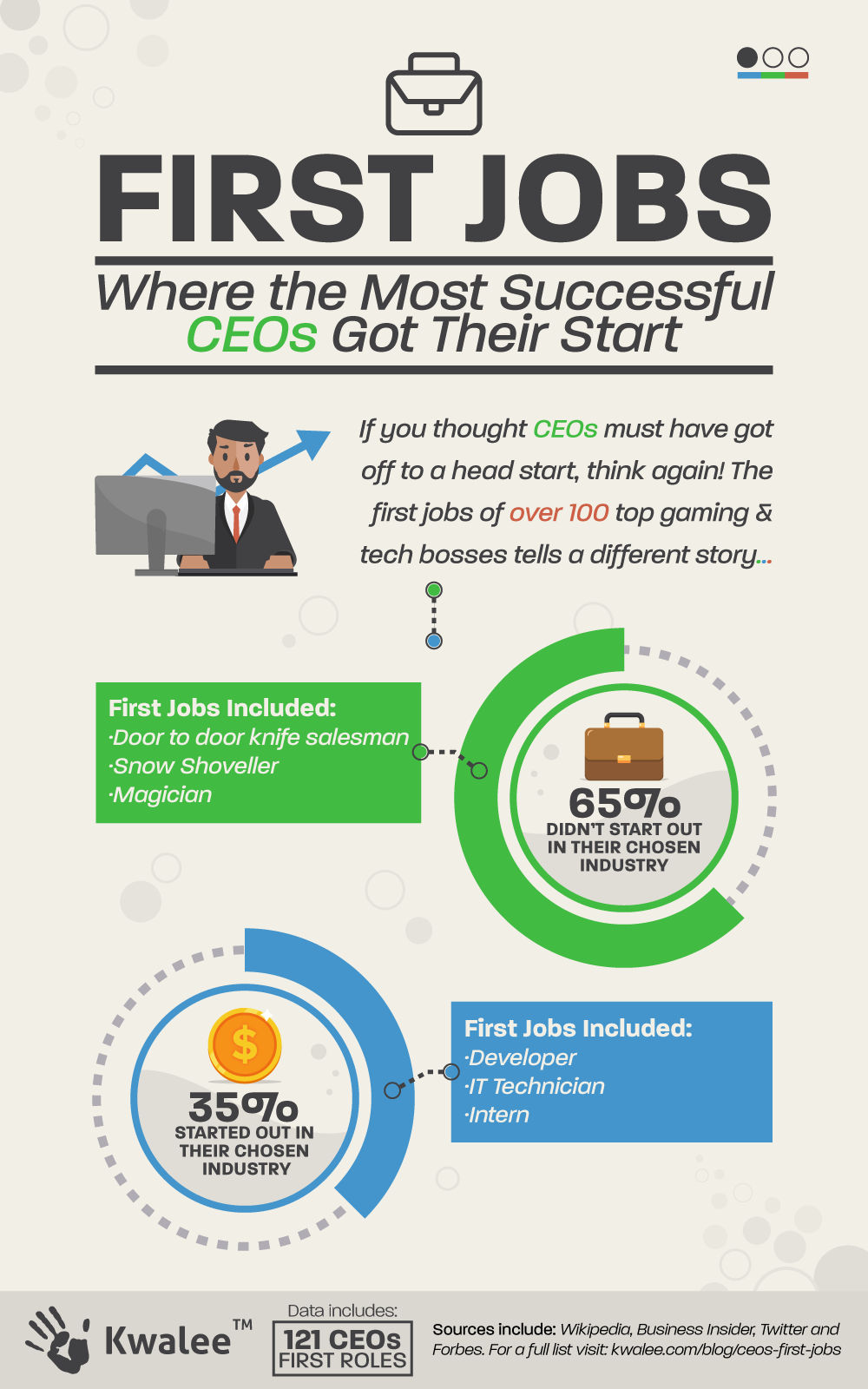 If the majority of the world’s most notable CEOs didn’t start within their industry of choice, where did they start?

The career paths of these CEOs came from fifteen different areas, ranging from deliveries all the way to law, showing that there really is no best place to be if you want to make it in tech or gaming. Of course, many did unsurprisingly start in the likes of Software & IT, but a large amount also started their working lives in retail and sales backgrounds.

Below, you can see the full breakdown by job category. 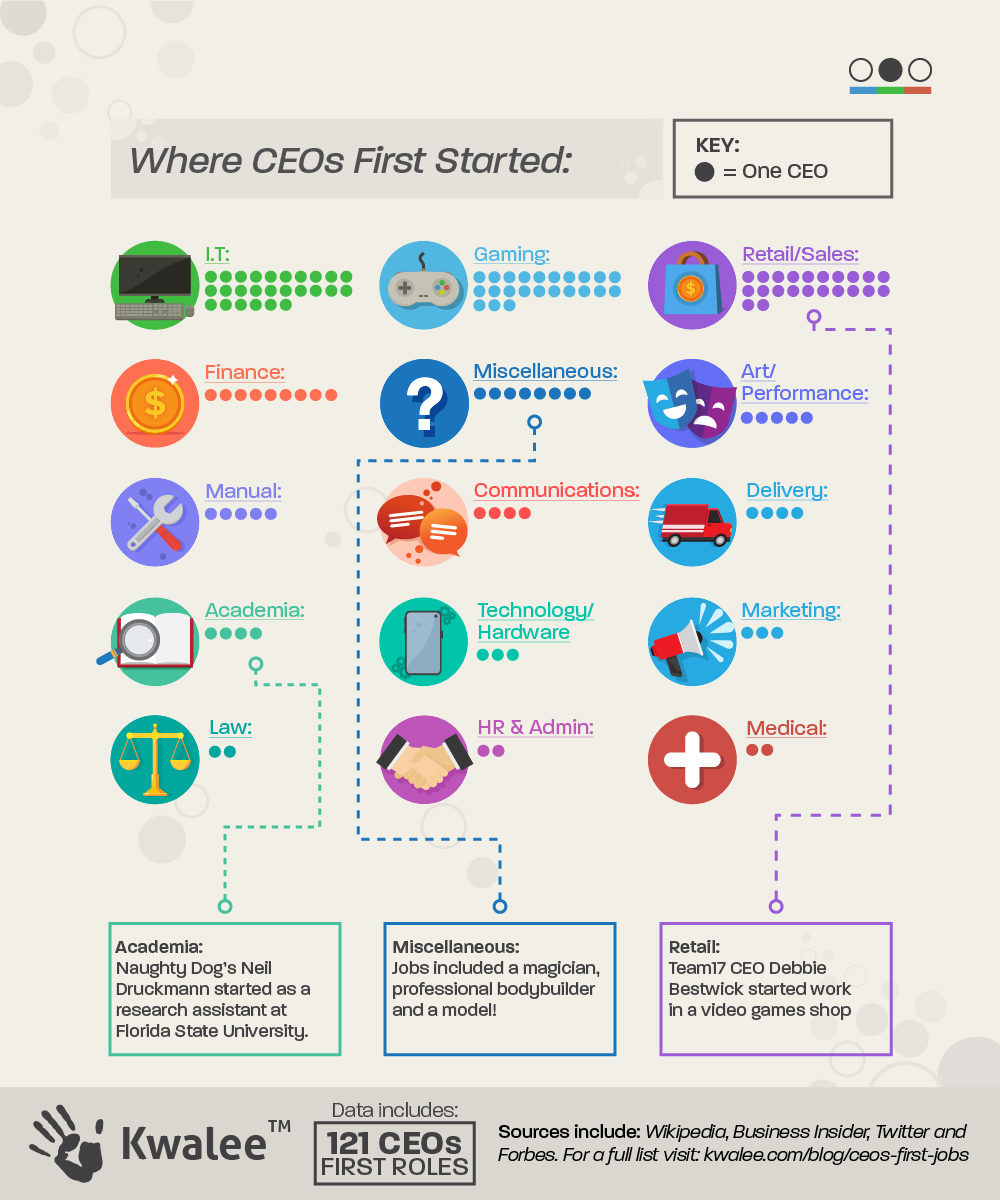 But what of those who defy categorisation? Take for instance Melissa Tarleton, CEO of online voucher code company RetailMeNot, whose first paid work was as a model. Likewise AirBnB CEO Brian Chesky, a former competitive bodybuilder, does not neatly fit with our preconceptions of a tech CEO’s backstory. Again, this helps to show that no matter where your career currently is, the barrier to entry is much lower than you might have thought – you just have to take the leap!

Elsewhere, McDonalds can claim to be the first employer of Amazon CEO Jeff Bezos; Netflix CEO Reed Hastings sold vacuum cleaners door-to-door; while Emmett Shear – the head of streaming platform TwitchTV – began as an intern at a cancer research centre. 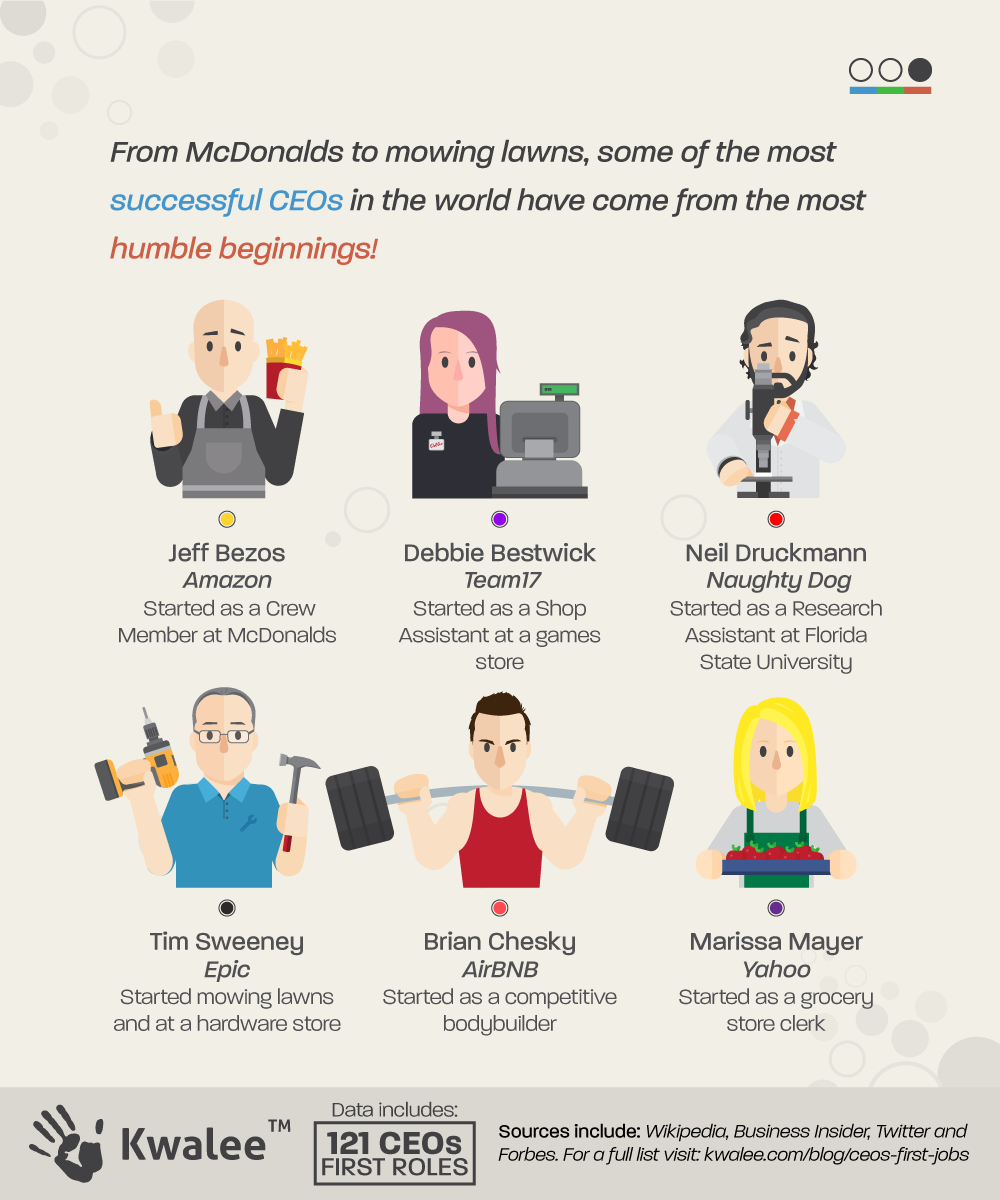 Specifically among the gaming CEOs we studied, even fewer began in their eventual industry – only 33%. Of those who did start in the industry and have made it to the top, around 30% began as independent developers/entrepreneurs and another 30% worked in Programming positions. Beyond that, 13% began as Game Designers while around 9% were in Production. The final 17% is made up of multiple roles within the industry, including Accountancy, Game Testing and Game Art.

But even beyond the roles themselves lie some interesting and inspiring stories. Hidetaka Miyazaki, responsible for some of the generation’s most critically-acclaimed video games as the President of From Software, has told of growing up “tremendously poor” and being entirely unambitious in his early life. He joined From Software, and the games industry, aged 29.

Kenzo Tsujimoto, CEO of Capcom (Street Fighter, Resident Evil, etc.) has written candidly about his humble beginnings. He reflects that “to rise above poverty requires two to three lifetime’s worth of effort… it was adversity that gave me the confidence to succeed, and it is without a doubt the source of my management philosophy.”

And then of course, our very own CEO and one of the ‘founding fathers’ of the UK games industry, David Darling started out like many of us did, by delivering newspapers in his local area. That was of course until game development caught his and his brother’s attention, and the rest was history!

With a job in gaming being viewed as one of the top three most fun and enjoyable industries to work in, we’re happy that our findings hopefully go some way to showing that if many of the people at the top of this world didn’t start in the industry, then there’s no reason to write yourself off! Gaming and tech are environments in which a broad range of individuals can thrive, and if you’re interested in taking the leap working in the fast and fun world of hyper-casual, why not check out our current vacancies!

Our list includes Newzoo’s top 25 public companies by game revenues (where CEO data was available), selected subsidiaries thereof, alongside a broader selection of some of the world’s most recognisable gaming and tech companies. CEOs included in the research are as follows:

Com2us – Song Byung-joon, CEO – Chairman of a startup community at a Seoul university

Wizards of the Coast – Mark Rosewater, Head Designer of Magic: The Gathering – Magician

* Positions accurate as of March 2020

The first roles of the 121 CEOs detailed in the research were acquired from the following sources. These sources included interviews that referenced the CEO’s first roles, or tweets from the CEO’s personal account, that detailed their first job: