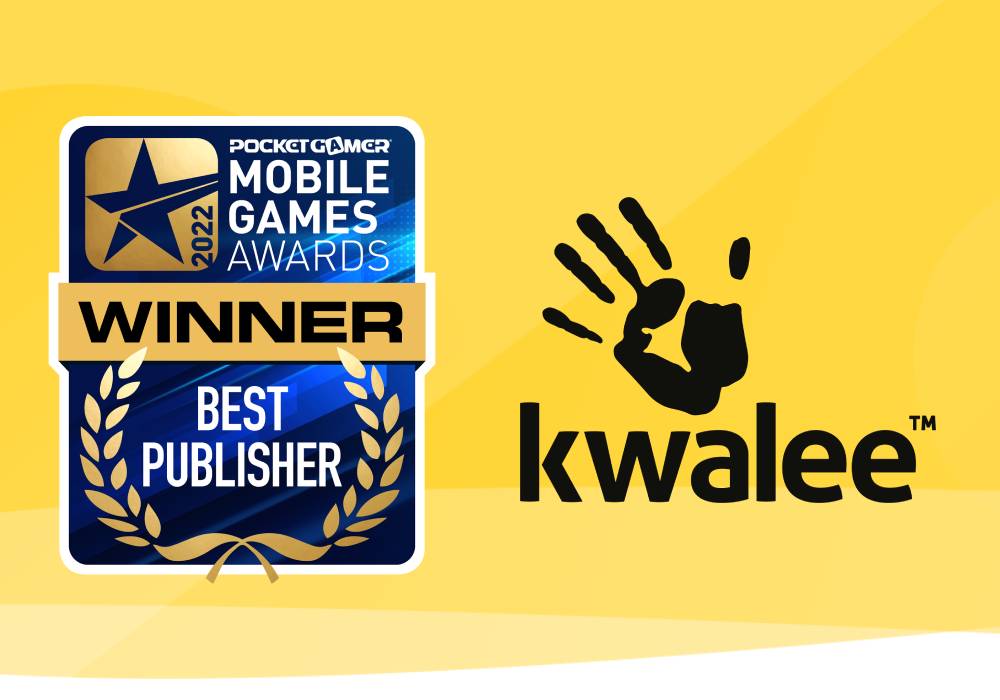 After a year of relentlessly putting out chart-topping games, working with talented game developers, and engaging with our communities to make our mobile games the best they can be, our efforts have paid off.

The Mobile Game Awards event has named Kwalee as the Best Mobile Game Publisher in the entire global games industry in a category contested by the likes of Zynga, Voodoo and Tencent.

At BAFTA, central London, we were gathered among the global mobile game industry’s best and brightest at a ceremony hosted by Pocket Gamer publisher Steel Media.

A number of winners were announced on the evening, as judged by a panel of independent mobile games industry experts, including the likes of Unity, Subway Surfers and Dan Gray of Monument Valley developer ustwo games.

But for us, the crowning glory was the Best Publisher award and considering how far we have come as a company in the past year, we were quietly optimistic. Having said that, some of our teams here are still processing the news about us winning the category entirely, while others are flabbergasted, popping corks and passing drinks as we speak.

In the past year, Kwalee as a company has seen major achievements in their publishing efforts. From launching successes like Makeover Studio 3D and Traffic Cop 3D — the latter of which was our biggest chart-topping success in 2021 — to acquiring French narrative-focused casual games studio Tictales and hosting numerous game jam events to bring game developers together, our portfolio of mobile titles grew to chart-topping heights.

In an industry where success through games is so hard to come by, we managed to establish a constant state of success with the help of our internal game development team which is the powerhouse behind more than 45 number one mobile games. Through these efforts, we were also awarded the title of Best Large Studio at the TIGA Awards in November 2021. We’re especially proud to have been honoured as both a developer and a publisher in recent months.

On the big win, our Head of Mobile Publishing William Cox expressed his delight, saying, “It’s a fantastic achievement for us to be named Best Publisher, and we’re proud of our ongoing work to help developers create life-changing successes. There’s never been a better time to get in touch with our team and chat about collaboration.”

Indeed, Kwalee is still actively looking to collaborate with mobile game publishers who are passionate about shooting their game to the top of the charts. We offer development support, investment and world-class marketing to turn your games into giant hits. A notable success story is Let’s Be Cops 3D, first conceptualised by a single developer, now with over 31 million installs worldwide — a total that doubled in 2021.

If that’s the kind of story you want your game to have as well, then head on over to the Kwalee Publishing Portal. Anyone with a passion for developing hypercasual, hybrid-casual or casual mobile games can send a few 15-second gameplay videos, or a simple prototype of their game to potentially turn your game into a global chart-topping success.