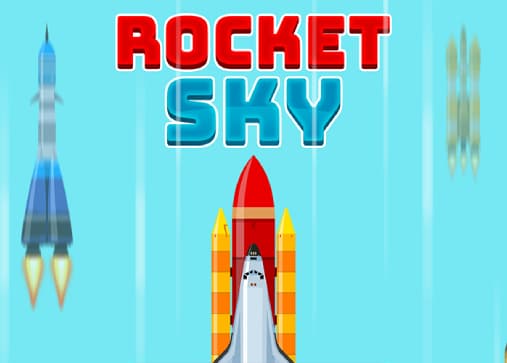 Rocket Sky! has been an enormous success by almost any measure, with over 25 million downloads worldwide and having ranked as a #1 app in several countries including the UK, Canada and Germany.

But at one point, it was just a prototype submitted to us by its developer DP Space AG.

If you’re a developer with a hypercasual game prototype that you’re hoping to get published, or even release yourself, that level of success can feel very distant. But as the Publishing Manager who saw Rocket Sky! evolve and grow into a global hit, I’ve seen that it can all come together very quickly with the right commitment and guidance.

With this in mind, here we share some of the biggest lessons in hypercasual game development, revealed by our experience with Rocket Sky!, which should in turn help take your own games to the next level!

#1 Get the basics right

The following points will focus primarily on the ways in which your game can be improved and optimised, but of course that’s all irrelevant if there’s not a solid base on which to build.

When we first saw a prototype of Rocket Sky!, we were impressed. It was polished, rich in content and most importantly, had a compelling core mechanic that was immediately clear.

The game had its challenges on a commercial level, not least its CPI (Cost Per Install) being too high for a hypercasual game. But we knew that the game had potential to engage people, which gave us confidence that these problems could be overcome.

If you don’t have that confidence that your game is satisfying at its core, you should seriously consider moving onto the next idea. The beauty of hypercasual is that you should be able to do this fairly quickly!

If you do feel that you have something to build on, then read on!

Sometimes, it’s hard to predict which changes will end up having the biggest impact on a game.

That was certainly the case with Rocket Sky!, which as I mentioned originally had a worryingly high CPI. In an attempt to reduce it, we began by testing a number of changed visuals in video ads: new animations, rocket skins, effects and more.

By far the most impactful change couldn’t have been more simple: we moved the speed and fuel meters from the top of the screen to apply them to the rocket itself. It didn’t do so single-handedly, but this small change was the biggest factor behind us managing to cut the CPI of Rocket Sky! in half, therefore making it a viable game.

There are a couple of things to take from this, the first being that tweaking and testing things  – even small changes – can have a huge impact. The second is that while these things are somewhat unpredictable (we’d be lying if we said that we predicted that a simple UI change would transform things so dramatically), there is a certain logic to them.

Moving the meters from the top of the screen to the rocket made for not only a cleaner UI, but it also made the whole game more dynamic. Players clearly responded to this and you shouldn’t underestimate how much similar tweaks could transform your game, too.

Whether you’re working in close proximity with your team members, collaborating remotely or working with a publisher, communication will be absolutely critical for you to get the desired results.

We were still building up our publishing team when we began to work on Rocket Sky! with DP Space AG, but it was quickly clear that the Russian studio was exactly the kind we wanted to work with.

On board from the start, communicating regularly and always happy to act on feedback quickly – as well as giving their own feedback to us – the relationship was fantastic and still continues. We work on content updates together fairly often and also discuss new game ideas.

For your games, you should aim for this same sense of openness with your teammates or your publisher. If you’re a solo developer you should seek out peers willing to give you honest feedback and to bounce ideas off of.

If you can align your ambitions for the project with those who can help you make it a reality, you’ll stand a much greater chance than trying to go it alone.

If you’ve yet to play Rocket Sky!, you can learn more about it here. And if you think your game could become the next hypercasual hit, learn more about publishing with us here to get started on your journey to the top of the charts!