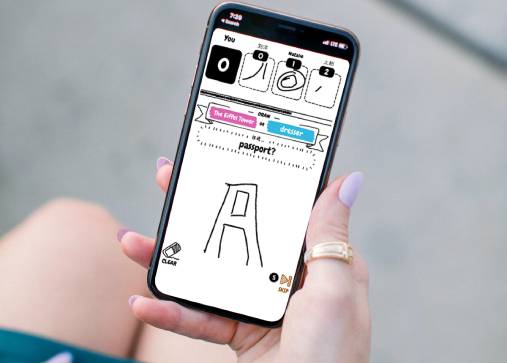 In the business of hyper-casual games, it’s important to create experiences with truly global appeal. We at Kwalee have enjoyed many worldwide hits, but none have encapsulated this principle better than Draw It.

Launched in 2019, Draw It has been downloaded more than 85 million times and continues to perform very well.

We attribute this first and foremost to the fact that Draw It is built around a very simple and universally-understood concept. Just as importantly, this core concept is combined with particularly smart use of technology to make for the most elegant execution.

For those who have yet to play Draw It, it is a rapid-fire drawing game in which you compete against others and the clock by doodling one of the two prompts that appear on-screen. The better your drawing, the quicker it will be guessed correctly to allow you to move on to the next!

Here are the key lessons we learned from developing Draw It that can be applied to your own hyper-casual game concepts as you work towards that global hit of your own.

First things first, it’s important to note that of course, most hyper-casual games don’t need to be built around novel technology.

Platforms like Buildbox, with whom we are official partners, offer accessible game development for everyone regardless of technical expertise. The beauty of hyper-casual games is often in their simplicity and relative ease of development.

However, Draw It is a great example of why your mindset should always be geared towards seeing opportunities for new and unique game ideas, particularly when it comes to technology.

We had been playing around with machine learning in a drawing context for a while before the concept for Draw It emerged, as we had a feeling that this unique technology could have some hyper-casual gaming potential.

We built a machine learning program designed to read some very specific data in order to learn to do a very specific task: to build an idea of how people generally draw simple prompts, such as ‘apple’ or ‘chair’. It uses this data to ‘train’ and becomes very good at predicting which of these you are drawing live.

Of course, not all game concepts require this level of technical backing, but in the case of Draw It this was by far the best and simplest solution to make it work. This shows that hyper-casual gaming inspiration can come from anywhere – and that being open to these opportunities when they arrive can pay dividends.

Some ideas may cross the line into over-ambitiousness, particularly in a hyper-casual context, but if you’re confident in the idea and can see a clear path to make it work, you shouldn’t be afraid to try something different!

Draw It may have more going on under the surface than many hyper-casual games, but in terms of what the player experiences it is very simple.

This is no accident. When prototyping around the aforementioned machine learning technology, one early prototype was themed around the world of art. Customers would request works of art from the player featuring certain recognisable objects, before mocking the player’s attempts until it recognised the requested drawing.

This was a nice concept but players didn’t respond well enough to it in testing. It was then that we settled on a much simpler version of the concept where you draw words presented to you like in the party game Pictionary.

After a two-hour brainstorming session, we came out with the competitive concept of Draw It that has gone on to be so successful.

Familiarity ultimately won out, and this is a great reminder to always be asking yourselves how your concept can be refined. If players aren’t engaging with your game as you hoped, try to define the simplest version of your idea and work from there!

#3 Build on the intuitive and cut out the frustrations

A big learning curve with Draw It was to make a game built upon machine learning feel more human.

One of the game’s biggest issues was that it simply guessed at player’s drawings too much. It was frustrating to be drawing with the guess constantly updating – ‘It’s a fridge! No, a giraffe! No, a bush!’ – when you just wanted some time to draw.

We stopped approaching it like a machine and more like a person; at what points would  a person guess? It would be when you stopped drawing a moment and looked to your ‘guessers’ for an answer, so we made the game behave in the same way.

This is a valuable lesson whatever technology is involved in your game: to think about how players will expect things to work and to make all interactions as intuitive as possible.

Smart tech may be great, but don’t get caught up in the efficiency of the machine when you want to create a natural game flow. Consider human inadequacies and flaws so that you don’t add mechanical frustration to your user experience!

If you would like to learn more about Draw It, you can do so here. And if you think your game has the potential to become the next hyper-casual hit, learn more about publishing with us here to get started on your journey to the top of the charts!