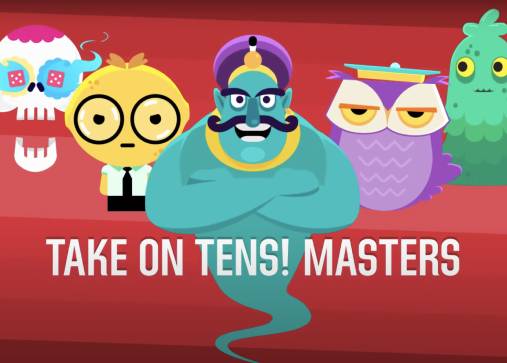 We were extremely excited last month to announce TENS!, our first ever console game. Today that excitement is even greater as we announce that the tricky puzzler will be launching for Nintendo Switch on the 5th November – and will also be coming to Steam for PC and Mac on the same date!

Even better, it’s available to pre-order on the Nintendo eShop and wishlist on Steam right now!

Combining sudoku-style number puzzles and block-dropping gameplay, the aim of the game in TENS! is a simple one: to place dice on the board, make tens in any row or column and clear the board to win.

But this is easier said than done, as you’ll come up against various game modes that keep the challenges coming. For the traditionalists, TENS! features an endless mode into which you can sink hours to hone your skills and keep improving that high score. However, at the centre of the game is the TENS! adventure map, where the player must progress through 70+ puzzle levels in a weird and vibrant world of meat-headed monsters in the mountains, aliens that like to turn cattle into dice, and lady luck herself!

There are plenty of twists and turns along the way to keep things interesting, including special tiles that teleport dice placed on them to random parts of the board, or even destroy them entirely.

A further competitive edge is added with adventure mode boss fights, where you’ll take on crazy TENS! masters in order to complete the map. Then there’s local multiplayer, which pits friends against one another in a race to make TENS! the fastest and thwart one another’s moves.

We’re a team with decades of console and PC gaming pedigree alongside our hyper-casual mobile game expertise, and we’ve always been inspired by all kinds of games across every platform.

Our CEO David Darling, who knows a thing or two about PC and console gaming having launched classic franchises like Dizzy, Micro Machines and Colin McRae Rally in his time, commented: “The Nintendo Switch and PC gaming are really popular within the Kwalee studio, with many of us being avid avid players on these platforms, so creating a game for the likes of Steam and the Switch has been on our minds for quite some time.”

“We’ve always been focused on games that appeal to everyone, and TENS! is a great example of that. The bosses, the unique puzzles and the core gameplay itself present a challenge to whoever picks it up, so we’re excited to see people playing, making TENS! and what the future could hold for the game and our work on these platforms!”

But alongside this, we’re showing no signs of slowing down with our hyper-casual game development and publishing efforts, with new game Let’s Be Cops speeding up the charts worldwide as we speak.

So TENS! represents not so much a new era for Kwalee, but just another way to enjoy our games no matter what platform you prefer. We’re all incredibly proud of it and can’t wait for you to play it!

You can learn more TENS! here and check out the game on the Nintendo eShop and Steam. If you are a journalist or influencer interested in covering TENS!, please shoot an email to press@kwalee.com.