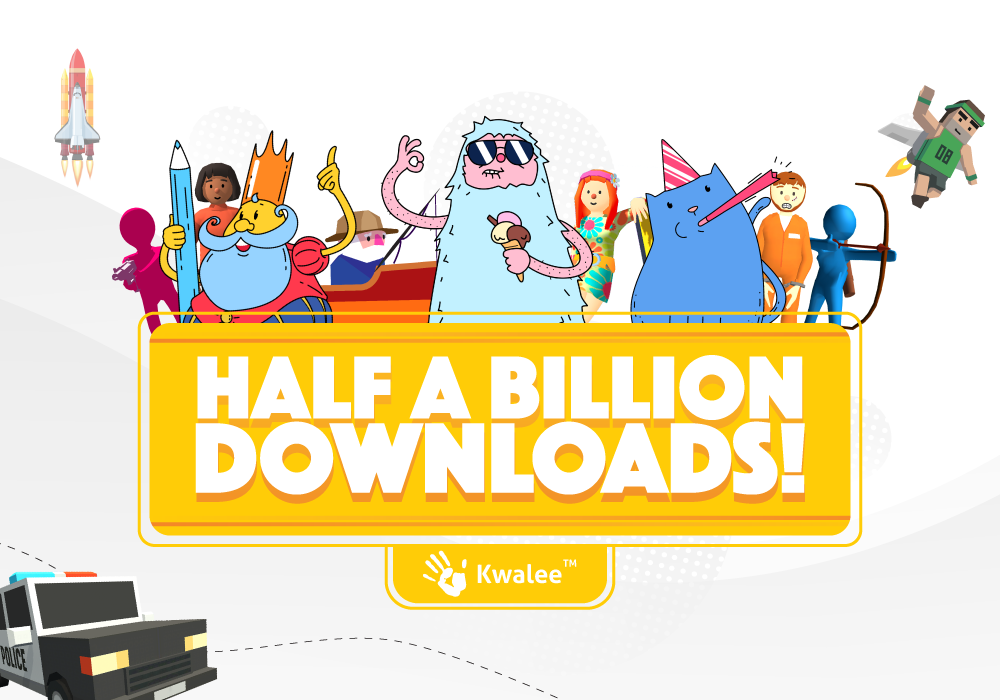 This, in a sentence, was the goal of Kwalee when we first established the company. Many things have changed in the years since then, but this core mission has served us well and we’ve never deviated from it.

That’s what makes it so pleasing to have surpassed half a billion downloads across our catalogue of games, a testament to the inspired work of our team and serious validation of our original vision!

500 million is not a number that’s achieved overnight and it took us a while to find a winning formula. But we’ve now well and truly hit our stride, with 90% of these downloads coming in the past two years of sustained success.

This roughly coincides with the period in which Creative Wednesdays have transformed our creative culture, allowing anyone in the company to pitch their game ideas and turning our development process into something resembling a game jam. It’s also during this period that we introduced our profit share scheme, which has paid out well over £1 million to date!

We’re constantly refining our creative processes, both in terms of our internal development and to support the brilliant third-party developers we work with, which has been underlined by the slew of hits we’ve launched this year alone. These include Bake It, Line Up: Draw the Criminal, Sharpshooter Blitz, Let’s Be Cops 3D, Teacher Simulator and Blade Forge 3D.

The fact that Let’s Be Cops 3D, Teacher Simulator and Blade Forge 3D all recently featured together among the top 15 games in the US shows how prolific we’ve been in this period and it’s been so inspiring to see our team firing on all cylinders even in a difficult year.

If you want to tap into our hyper-casual expertise, get in touch and we can work with you to improve your game by providing the coaching and insight that only sustained success across multiple launches can bring. We’ll also invest in your games every bit as much as we do in our internally-developed titles, with all departments working tirelessly to make them a success.

And of course, there are other ways you can work with us. Having hit another milestone in recent weeks by passing 100 team members, and in a year in which we’ve expanded internationally by building teams in India and China, there’s never been a better time to join our team.

We have more than 60 vacancies right now in various departments and you can join us from all over the world. Help us to launch even more games that millions love as we chase one billion downloads!